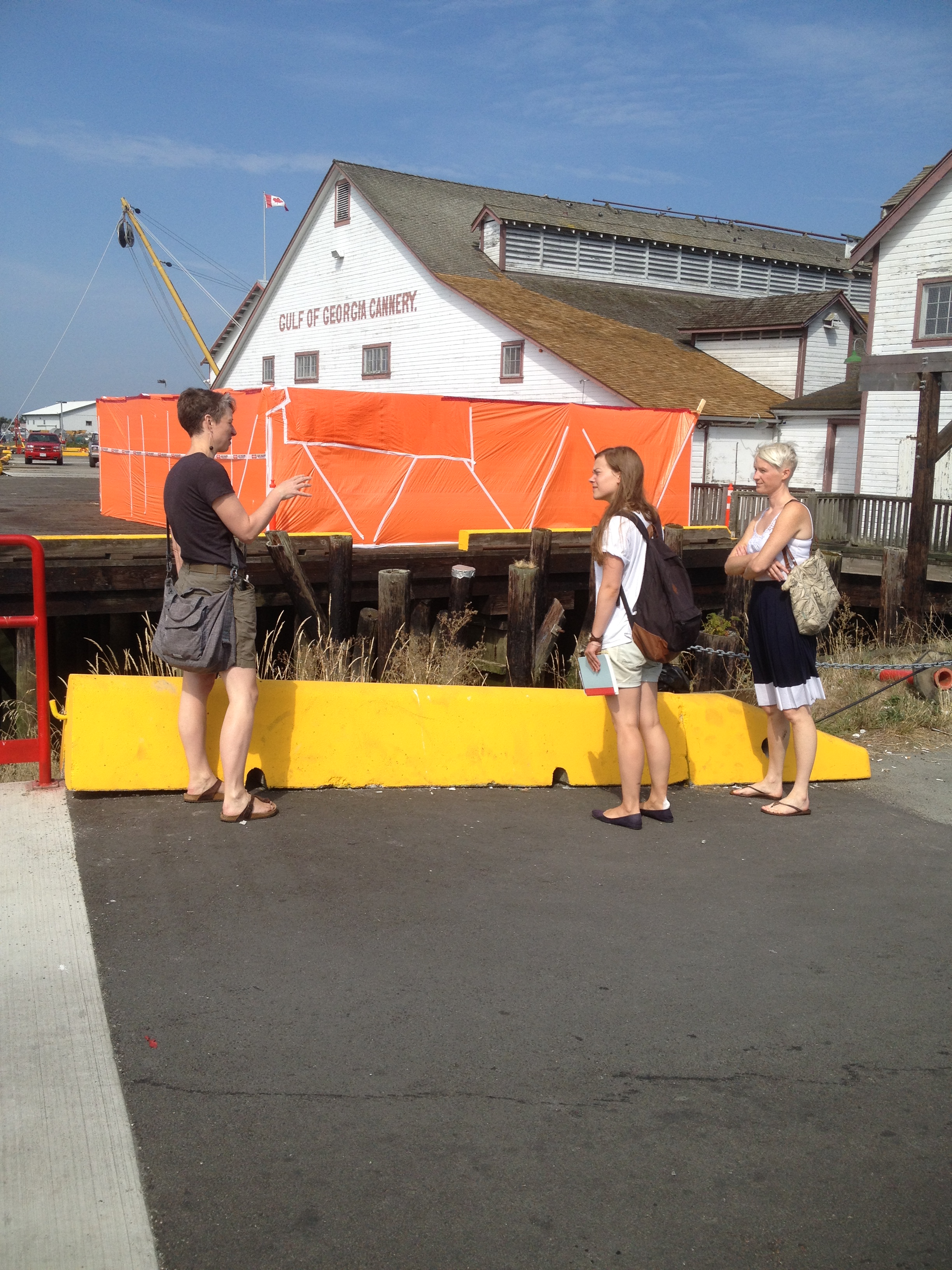 Posted at 23:24h in news/events by admin

The sun was shining at 10 am on August 23rd when part of the cloTHING(s) as conversation team met outside the north building of Emily Carr University of Art + Design (ECUA+D). Mia Daniels together with Hélène Day Fraser and Keith Doyle had planned a field trip for the day, while Lisa Boulton and myself did not know more than that we were going somewhere in the GVD (greater Vancouver district/area).

30 minutes later the destination was revealed when we arrived in Steveston. It was a beautiful day. The streets were filled with a mix of tourists and locals. As we walked along the sidewalk our conversation was interrupted by a young man who approached us with leaflets about a cause he wanted us to learn about – wanted us to support. Initially his tactics caused a bit of frustration and unease for our group of wanderers but it quickly sparked a new conversation amongst us about how we deliver messages to each other and what mediums are used to share ideas in today’s society. Things to consider!

Out on the pier I noticed a man mending a fish net on his boat. He looked so peaceful and content sitting there. It made me think of how nice it is when someone decides to hold on to an object and really try to take care of it. I was drawn to wondering about the act of making – to thinking about what it means to allow something to last for as long as possible as opposed to throwing it out when it’s worn. Mending is almost a distant concept today. Seeing the man on the boat, the local fishermen in worn clothes and the beautiful old wood buildings by the pier, I think, made us all realize how much we appreciate patina and the memories that come with these observations.

Walking off the pier we noticed a bright orange, plastic covering for something, sitting just outside one of the wooden buildings. It was interesting seeing this contrasting colour as a part of the rest of the surroundings. It didn’t quite fit in. It was as if it was making some kind of a statement or sending us a message that we didn’t quite get.
We passed by the Gulf of Georgia Cannery Society and decided to have a look inside. The minute we stepped inside we noticed a very distinctive, strong smell. This smell very quickly became the main topic of conversation. Imagine five designers wandering around a building trying to locate the source! At some point the conjecture was that it might be from Creosote coated wooden beams supporting the cannery building, which was constructed over the water. Later we saw a sign on the other side of the orange structure that we had noticed before entering the museum “attention! Lead paint removal” – the source of the disturbing odour? We never found out for sure.

The cannery is now a museum, but it was one of the largest canneries in BC from it’s opening in 1894 till 1930 when it closed. It was amazing to see all the machinery that would have been used during the canning process, still intact. Walking around the cannery, seeing the massive steel structures with flaky paint and rust and not hearing any sound except for your own footsteps on the floor and the seagulls outside was uncanny.

On our way back to the car we walked passed a man with a roadside stall selling second hand objects. On one of the tables he had a strange item that looked like a mix between a typewriter and a calculator. Hélène fell in love with it right away. A transaction of $20 cash ensued. We later discovered that the object was a comptometer, a key-driven mechanical calculator that – depending on the skill of the operator – can work faster than an electronic calculator (!). No task has yet been given to our comptometer but we are letting it sit in our 3D print lab at Emily Carr University just in case it turns out we can put it back to work!

On our way back to ECUAD we stopped by to visit Winson, a friend of Hélène’s who has a small clothing factory in Richmond, directly under the flight path of the planes arriving at YVR. Winson showed us around the workspace and gave us a brief introduction to his small scale manufacturing process. As the space he has available is quite limited, it was really interesting to see how they are able to keep everything organized in a manner that’s efficient for them – to see the way they work.

Production, connection and calculation seemed to be the themes of the day.
Much to consider I think!